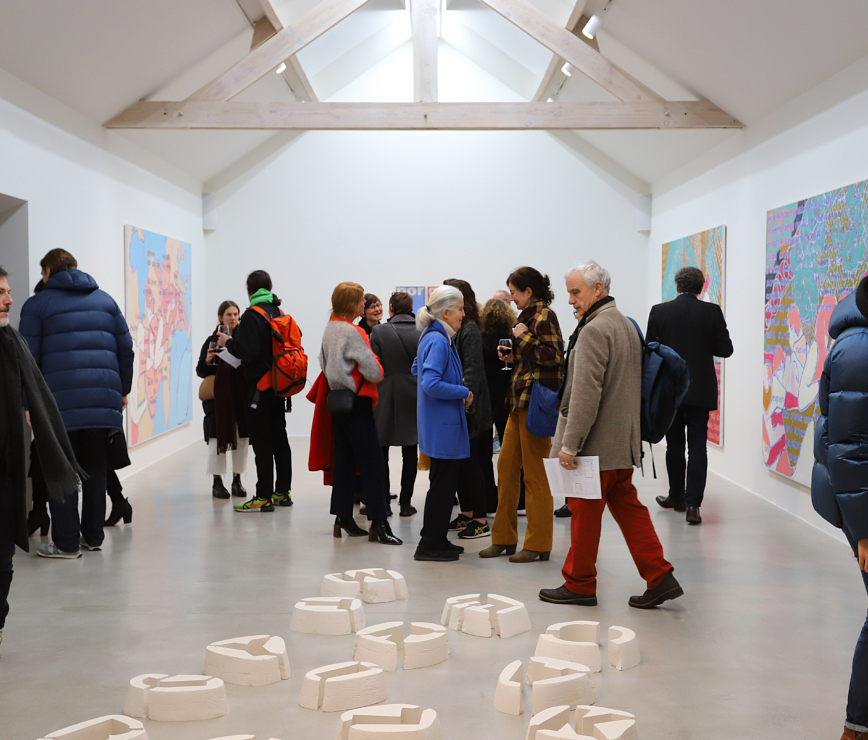 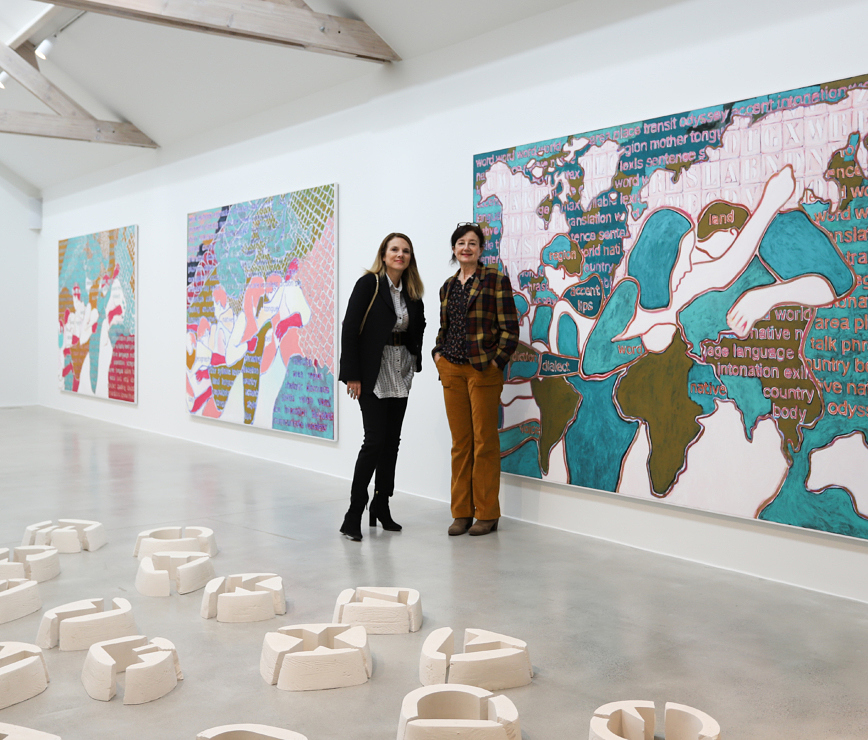 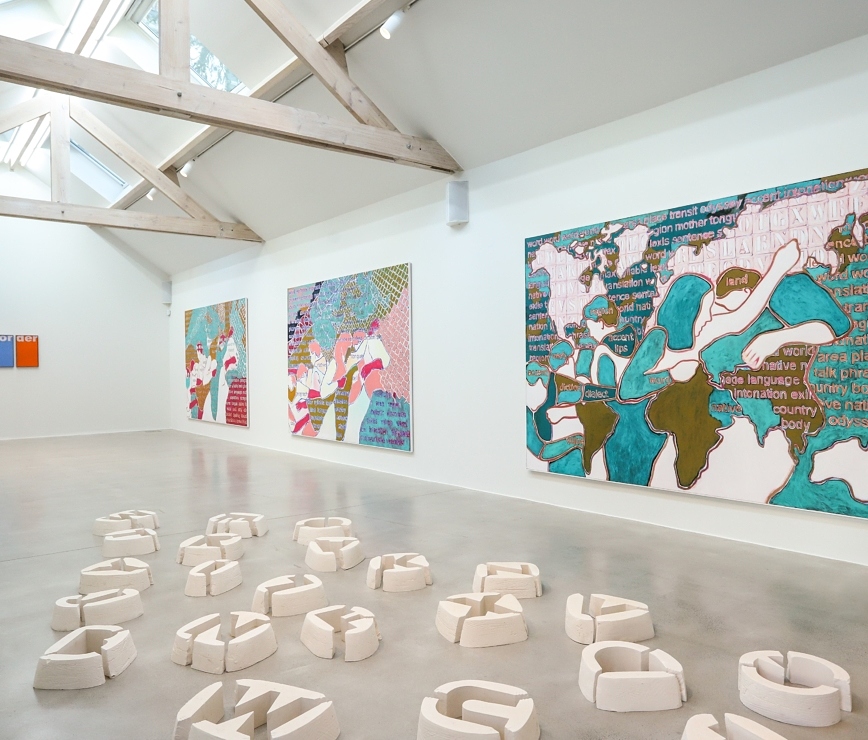 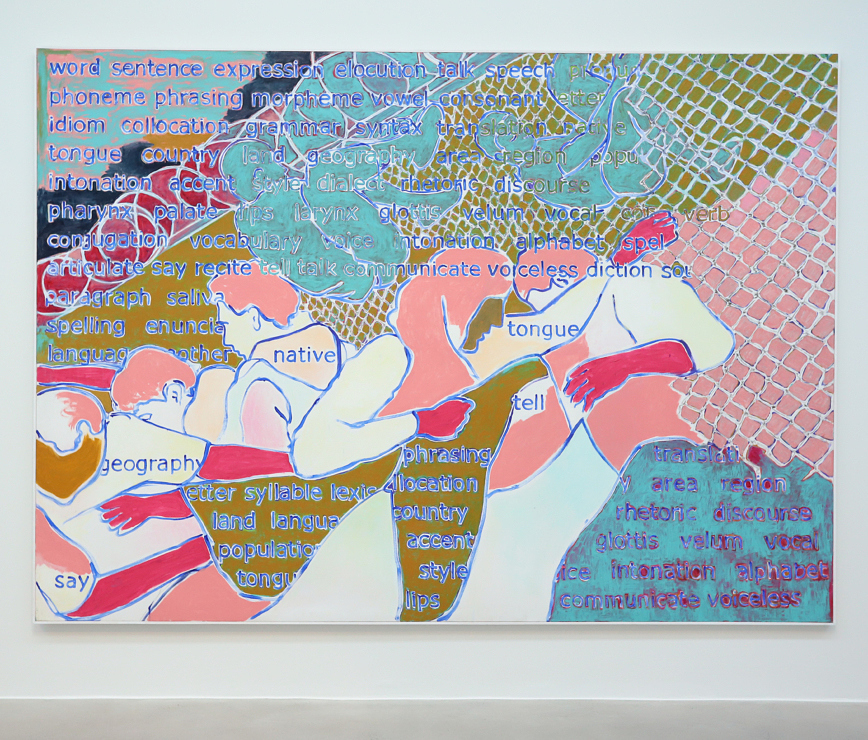 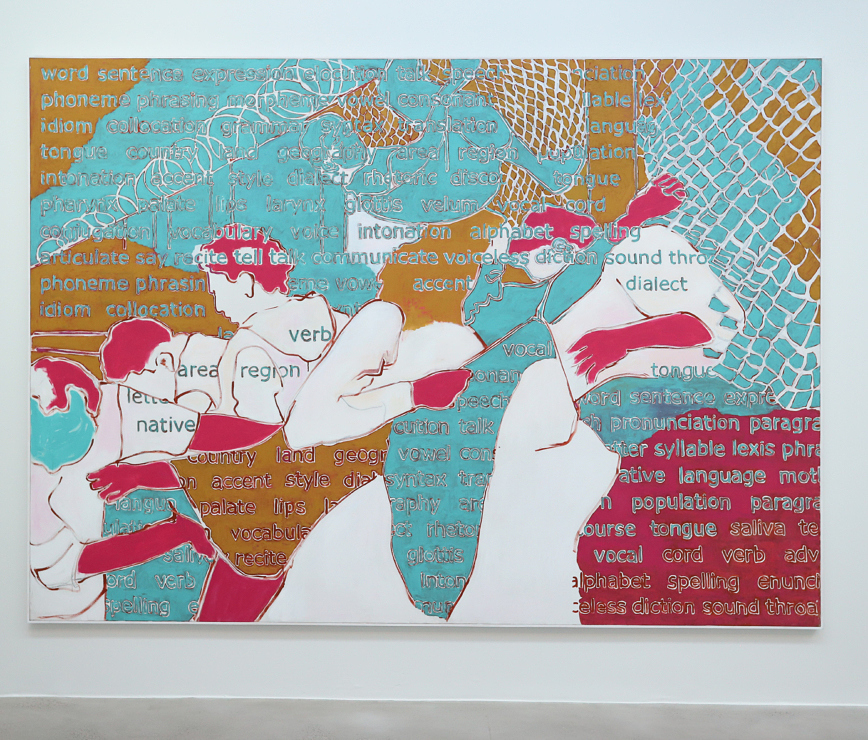 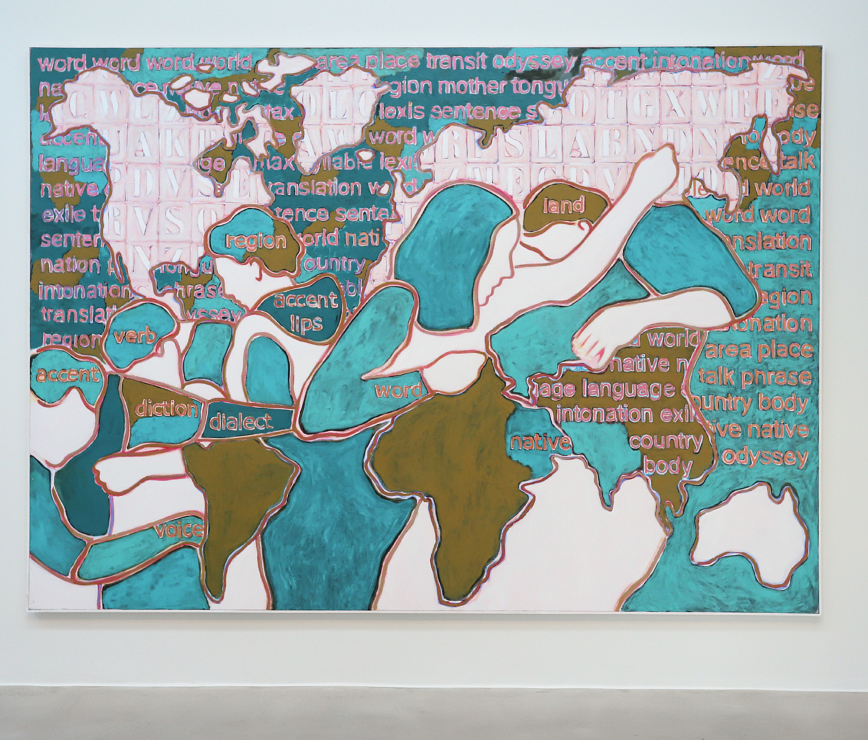 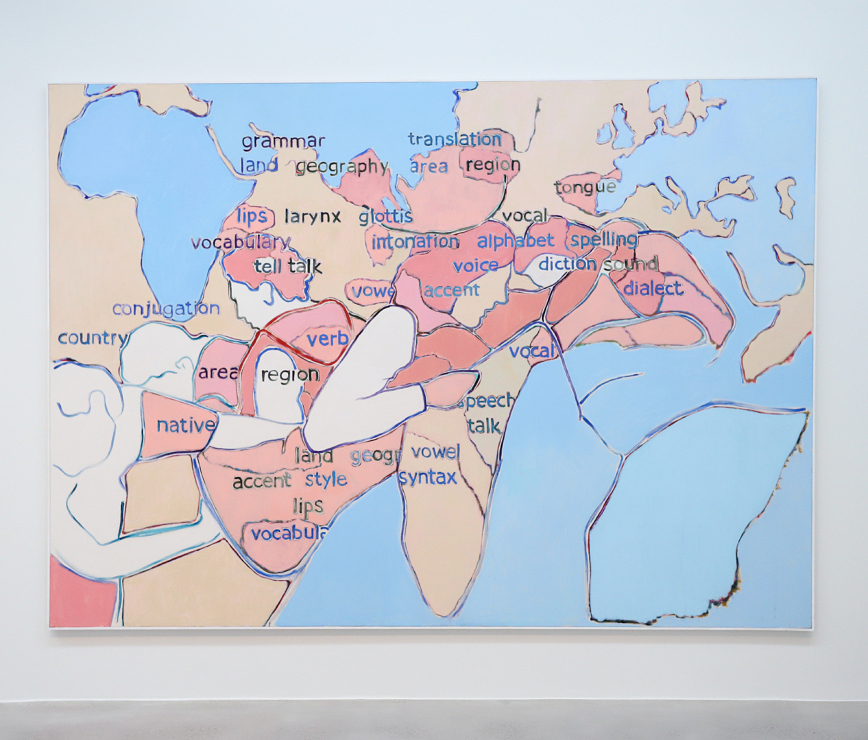 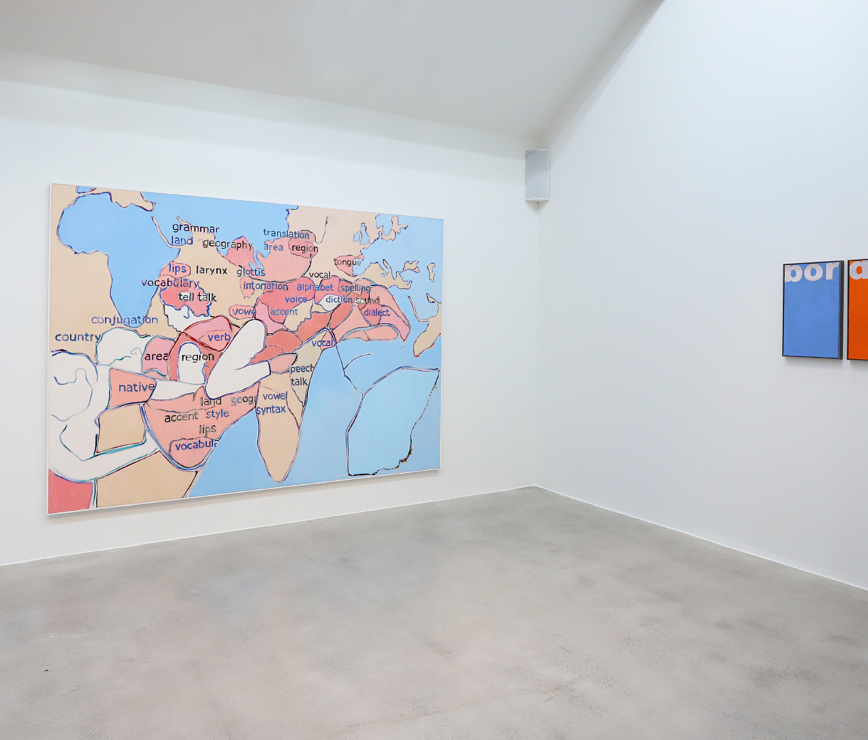 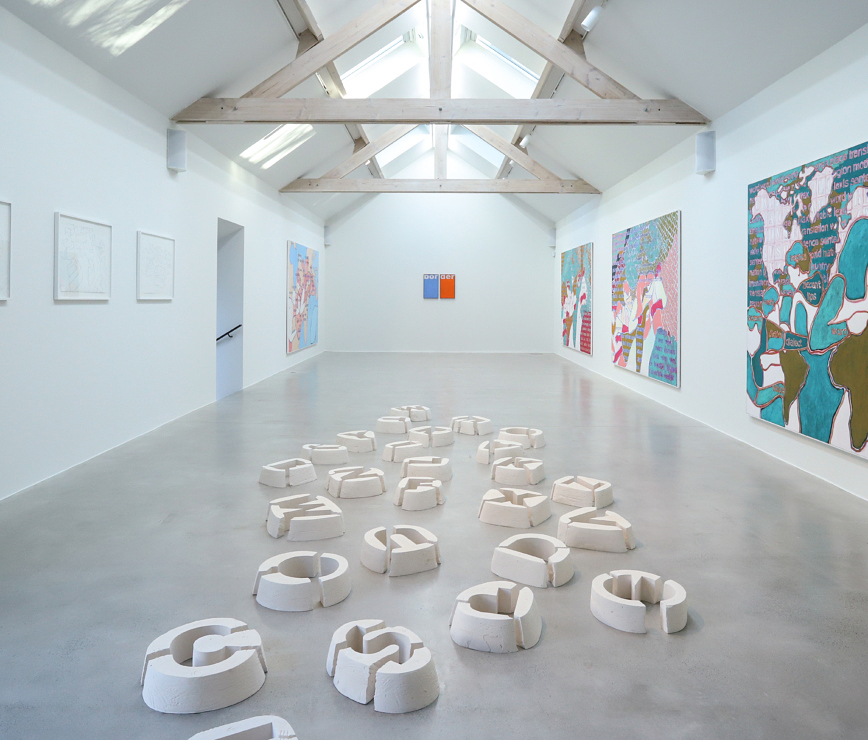 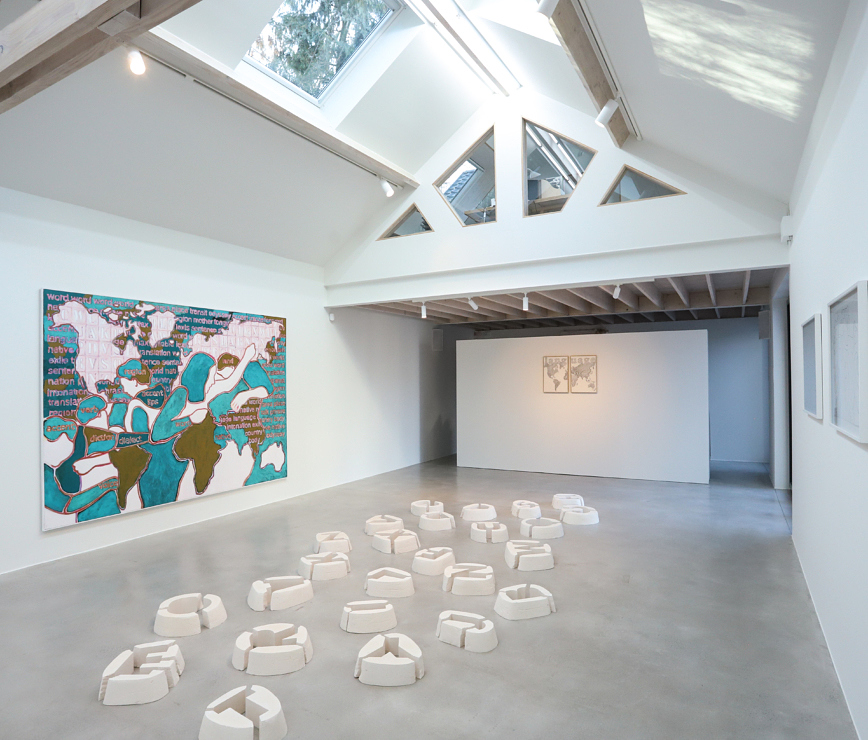 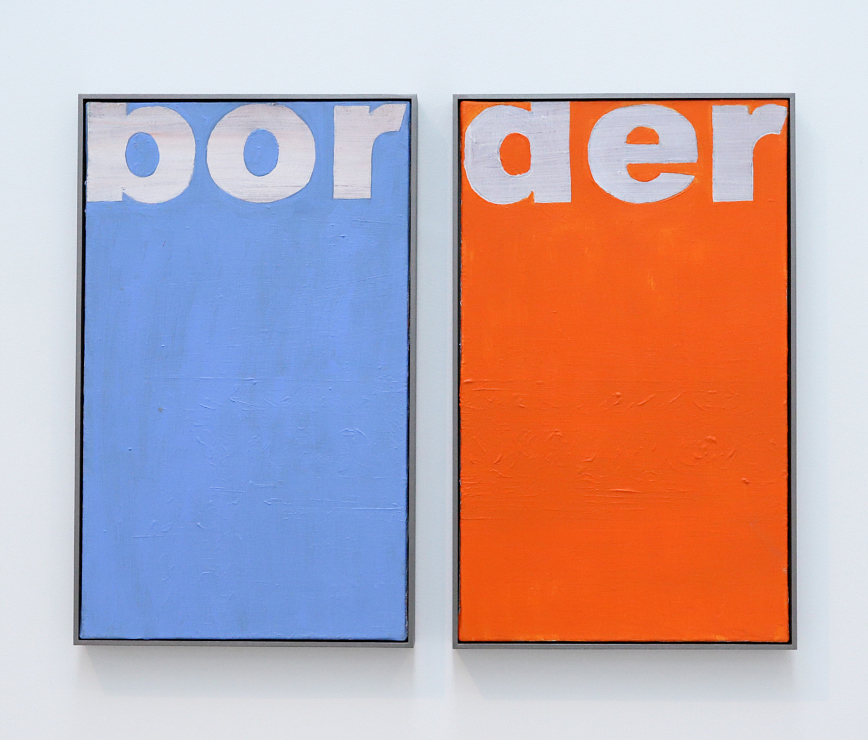 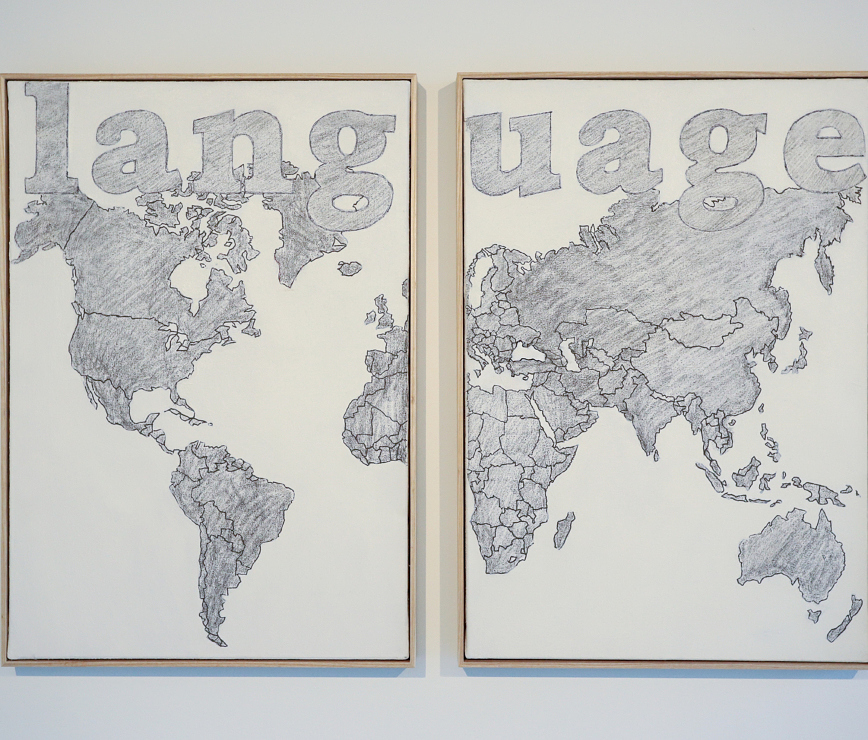 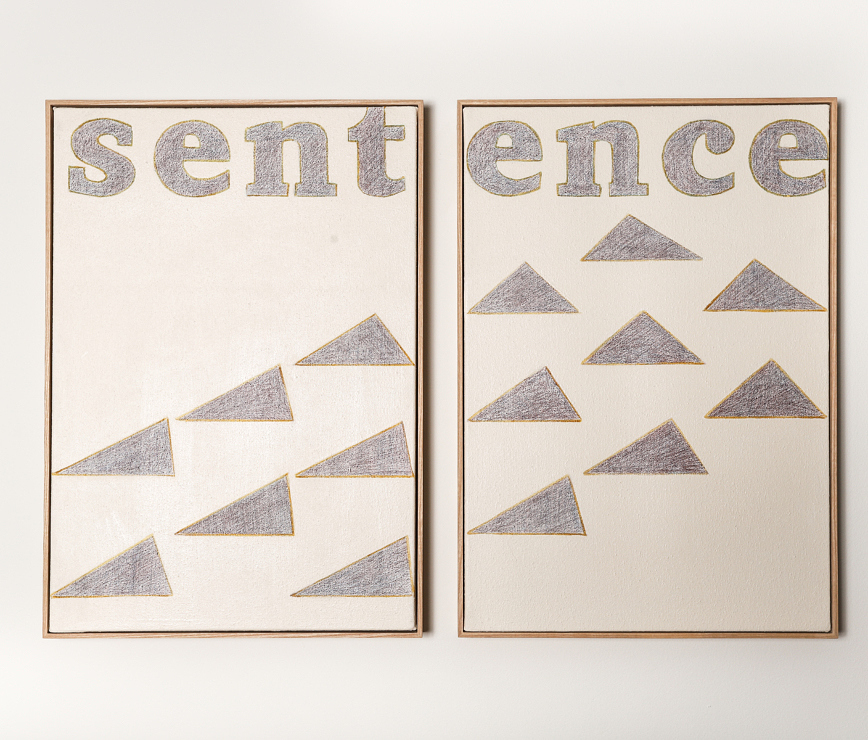 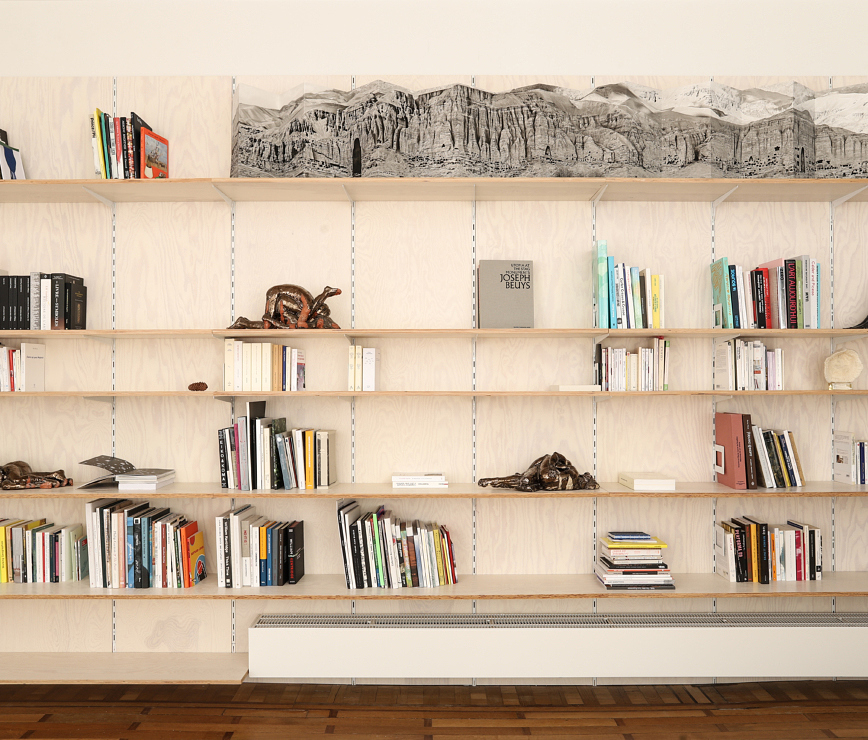 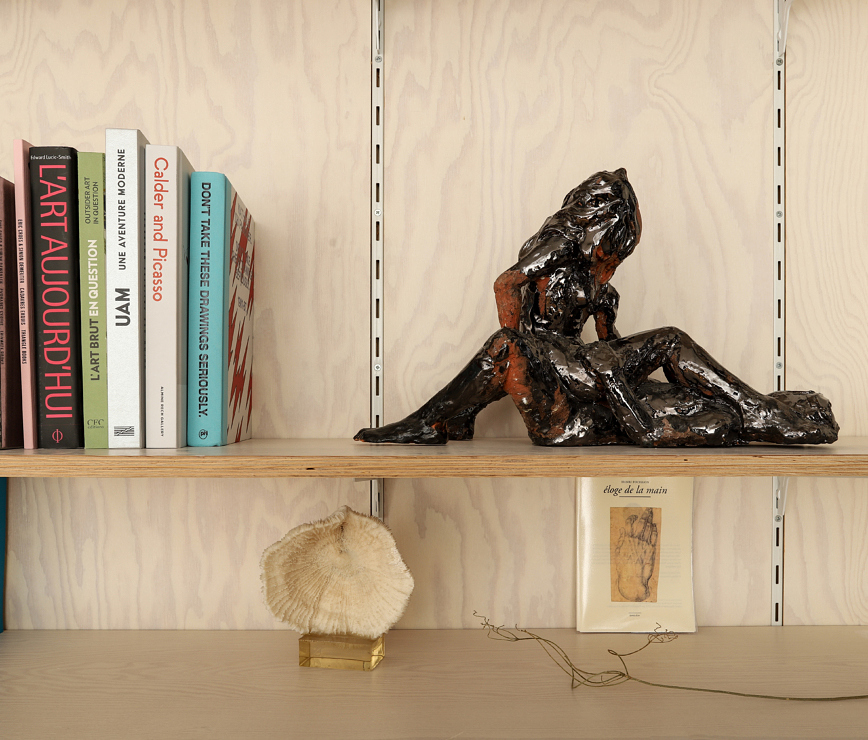 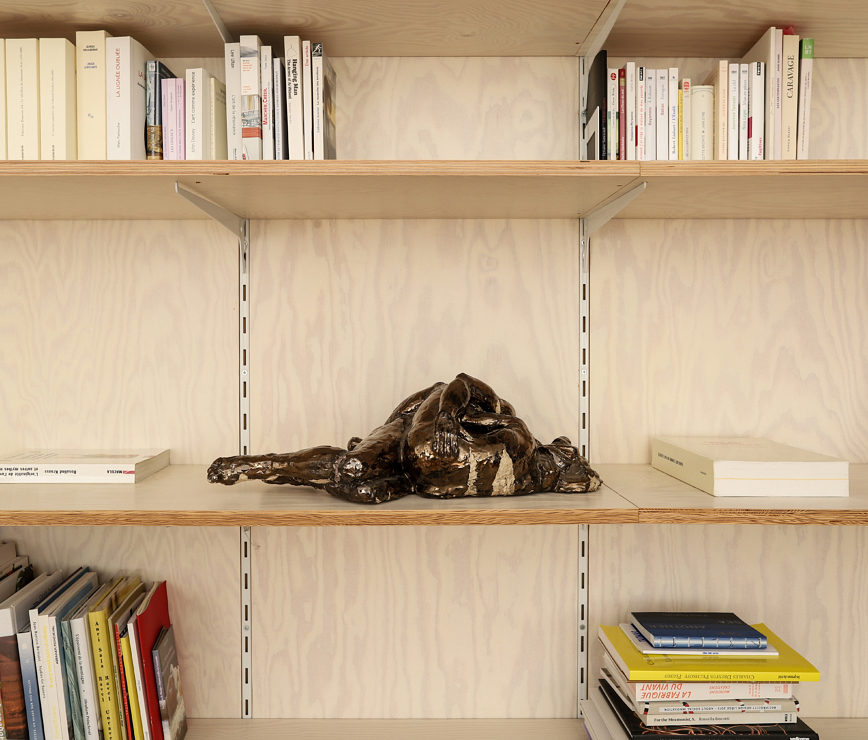 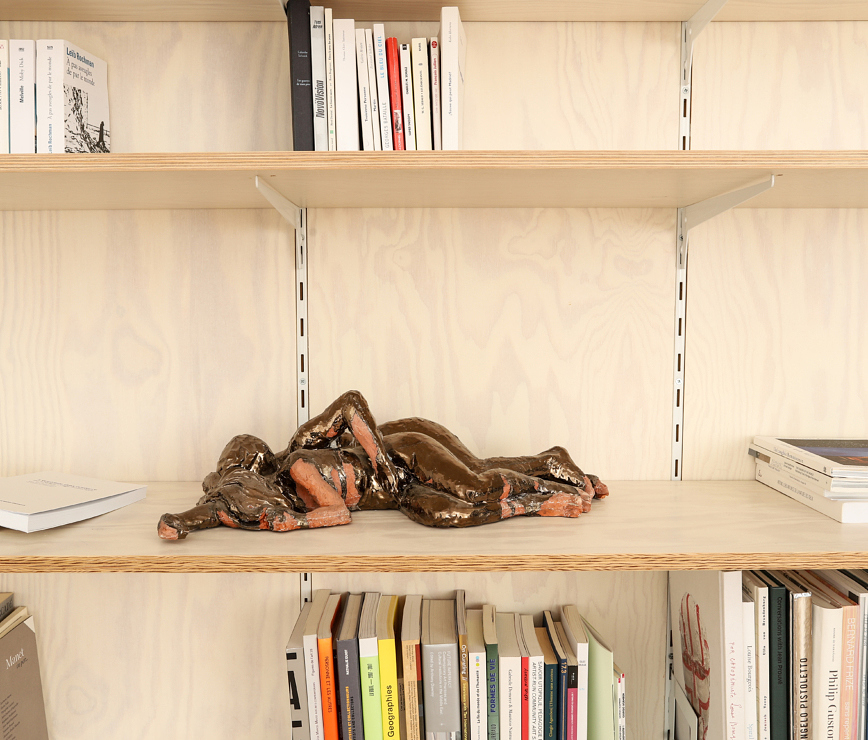 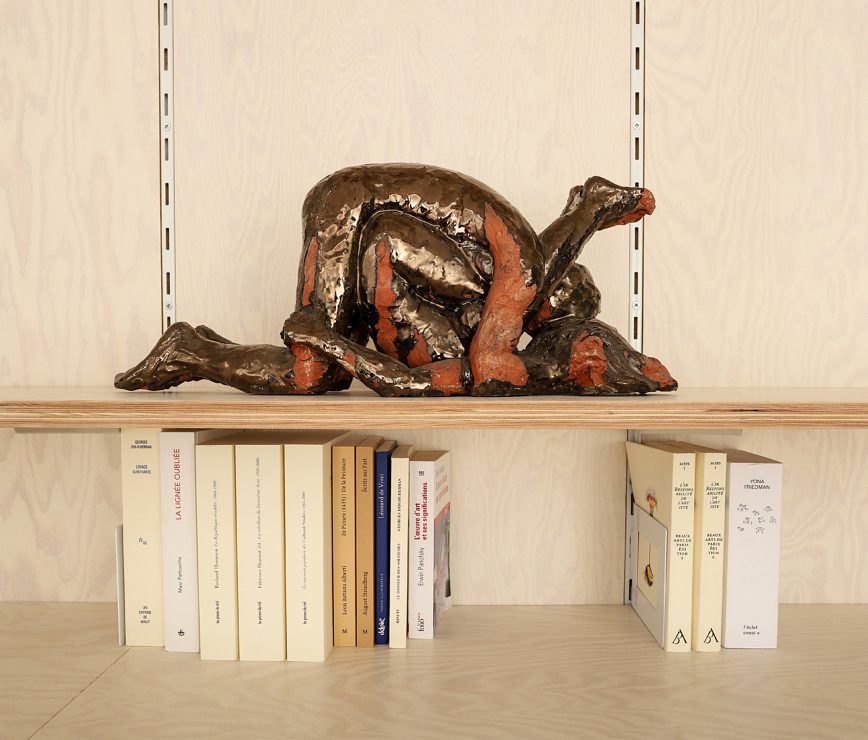 The Fondation Thalie is pleased to present Land & Language, a series of paintings by Agnès Thurnauer started in 2016, composed across four variations. These outstandingly political works are inspired by the current migration crisis: “I was very moved by these images of crossing… The border is a site of crisis. It is also the passage from one language to another.” The artist’s body of work examines permeability and dialogue between mediums, between text and image, between the figurative and the conceptual.

Land & Language echoes the great paintings of art history, in which anonymous figures eclipsed heroic ones. The diagonal composition of Théodore Géricault’s The Raft of the Medusa inspired that of Land & Language, as well as Pablo Picasso’s Guernica, which, in 1937, shifted the paradigm of the painter and model in the atelier towards political painting instead. The surge of depicting current events within the pictorial domain provides a record of the upheavals of History, of which the artist is the translator, embodying the physical and symbolic tensions at work. From this arises a “tableau of crisis,” raised to the second power: painting, constantly emerging, reveals, in its élan, a world in crisis.

On a very large canvas, arms and heads of men and women, chaotically interwoven, form a chain of solidarity without beginning or end. This human chaos echoes that terrifying dark series by Goya, whom Agnes Thurnauer readily cites. “This very powerful series by Goya consists of blocks of images that seem to have been scissor-cut, and seem to collide into each other,” she emphasizes. This sensation of collision is also found in Land & Language. The découpaged forms, deeply inspired by Matisse, and the fluidity of the line, highlight the blocks and the oceans of color that knock together as if affected by a cataclysm. The pure colors, applied directly from the tube, and the often-strident contrasts further translate the violence of the migrants’ situation—but also the drive for survival at the core of this search for a better world. It evokes an incredible energy. The viewer notably distinguishes, amongst the anonymous masses in transit, a woman’s raised arm: this iconography of uprising, which so fascinated the philosopher Georges Didi-Huberman, and also distantly echoes the famous work Liberté by Delacroix, if with less lyricism. Despite that, no distinct identity asserts itself. Bodies become countries, full-fledged territories. Affected by multiple tensions, the canvas is transformed into an immense geographical map in the very midst of recomposition.

These tableaux, built around an outline of writings by the English poet Rod Mengham, help create a psychological cartography within painting. In Agnes Thurnauer’s work, language is a purveyor of space. In her sculptural work Matrice, encompassing a molds of letters of the alphabet, bodies are made to circulate in a space that is at once physical and symbolic. In the fragmented Land & Language, the integration of words between and within bodies transforms the canvas into a dense and complex psychological territory. The words seem extracted from the flesh and become conceptual again. They cross boundaries and blur them. “Migration raises the question of bodies and language,” the artist explains. “When you move, you carry your mother tongue with you. Bodies become the political and symbolic limits of language.” This is how the question of identity and culture is posed: What do we take with us in exile? What remains of our past identity? How do we “migrate” from one language to another, from one culture to another? What end up being the limits of these movements? In the last tableau, oceans have invaded the geography of the canvas and words form only one possible cartography. A small predella punctuates the whole: the word BORDER, deployed in two formats, changes color from one syllable to the next.

In her works, Agnès Thurnauer often suggests how much of the world comes through by way of dialogue and interactions. And if language separates human beings, it is also the vector by which they are linked. Migrating to another culture can be part of a movement of openness to the Other and to the (re)construction of the Self. Synonymous with tearing and abandonment, and sometimes with a withdrawal into the Self, exile implies both the possible conquest of a new world and another Self. And it is there, implicitly, where Land & Language invites us to consider a wider, plural, more enriched and multicultural identity, stretching across borders.

Agnès Thurnauer is a Franco-Swiss artist. A self-taught painter, she studied video and cinema at the École Nationale Supérieure des Arts Décoratifs in Paris. Her work addresses the issue of pictorial language; her practice implements a space in which figuration and abstraction yield a new vision. Writing, materials and framing choices are just as essential to her as her painter’s palette. Her recent work, playing with volume, extends this pictorial language into three dimensions: just like in her paintings, the viewer’s gaze circulates between the shapes of the letters to generate fresh interpretations every time. For Agnès Thurnauer, “the viewer shapes the picture” as much as the picture shapes the viewer. Her work activates this spirited interface—this reciprocal reading—between the art and the viewer. Agnès Thurnauer’s work has been exhibited in museums and international art centers (Centre Pompidou, Palais de Tokyo, CCCB Rio, SMAK Gent), and her works are part of many private and public collections. Agnès Thurnauer is represented by Galerie Michel Rein (Paris-Brussels) and Gandy gallery in Bratislava.