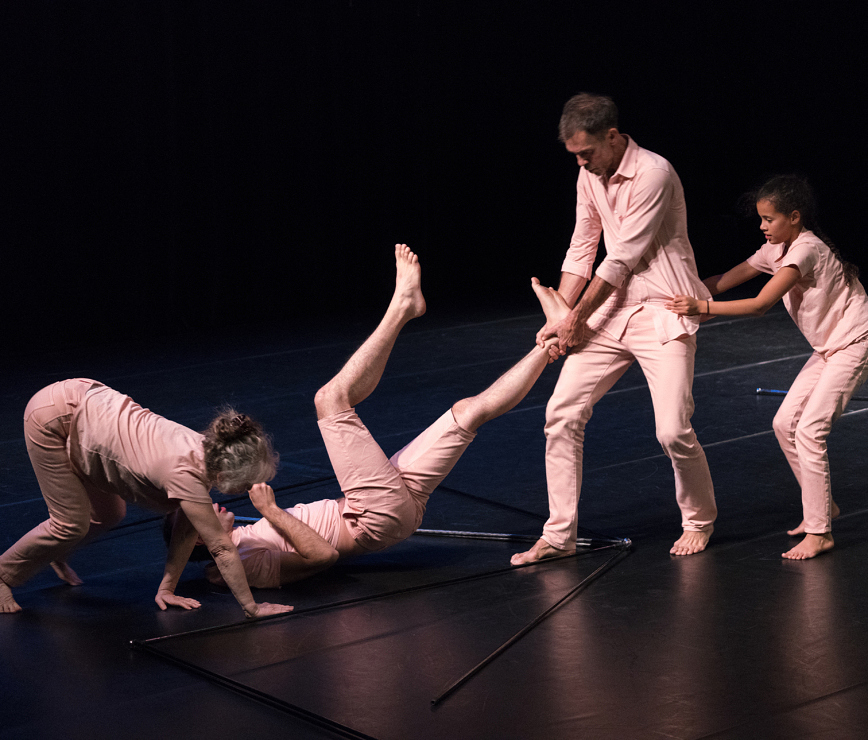 The Fondation Thalie is coproducing ‘Formation’, a new work by the choreographer and dancer Emmanuelle Huynh

In this new dance piece, Emmanuelle Huynh brings to life four characters, from four different generations, in a sculptural context conceived by the artist Nicolas Floc’h.

The spatial arrangement, the texts by Pierre Guyotat and the bodies reveal what changes can mean as a metaphor for the struggles, accelerations, efforts, and falls that make up the archaeology of a life. Through choreographic practice, Plateforme Mua generates knowledge and emotions that can allow society to rethink, restructure, and to invent… Viewed through the lens of Emmanuelle Huynh and this new work, gestures made inside a theatre become a sounding board in a public space.

What is the origin of this new work ‘Formation’?
This project came about through reading Pierre Guyotat. The author writes about how, between the ages of 0 and 14, in the midst of the Second World War, he was educated and trained by his environment in the broadest sense, nature, religion, the war, books, his relationship with his family, the touch of his parents… Reading this was a shock for me;

I wanted to express onstage not just the text itself, but also its sound; the writing is sublime and it seemed essential to see if it was possible to show, through the body, how life itself is a slow education, full of falling, speeding up and slowing down …

With set designer Nicolas Floc’h, we thought about what material to use as a metaphor for this transformation; we initially thought about caramel or latex (…) we tried ropes. Nicolas had worked with undersea cables for one of his recent exhibitions, but it didn’t work; I had the impression I was in the middle of some outsized female handicraft. That’s not what I wanted to say.

And then he suggested using long, thin carbon rods, modules that would allow us to construct shapes, with magnetised knobs at the ends so that they could be stuck together, a bit like the idea of a Calder mobile.

And with just a few movements onstage, you can continuously reconfigure new shapes …

It’s a bit like the way life turns out one way or another and then after a while, gets reconfigured differently from what you had imagined, and it’s a very beautiful way of creating a space, a metaphor for something that is at once like a game, but also a form of construction (…)

The structure is visually very beautiful. Bodies of different ages appear on stage like the phases of life. We see a child, a young man, and an old woman, and you can imagine that these four ages could all be the same person, as they change genders, interact and merge, and you can also imagine different family ties between the characters, which are constructed by this sculptural framework in constant motion.…

They build shelters in which to live, first on the ground, etc. And then we move from the ground up. It’s very scripted. In this piece, the sculpture is highly present. It’s therefore necessary to highlight interesting shapes… It’s both a playground and life itself that one is building. There is a sense of multilayered meaning to the simple shapes that accompany the dancers on stage.

How is the writing of Guyotat brought to the stage?

We recorded texts with the help of Matthieu Doze. We took part in a workshop for young actors at TNS, during which the texts were recorded. Onstage, you hear them but you don’t see anyone, so they are truly hovering in the mental space of the theatre and the audience. We also use ‘le Livre’ (the Book) (ed. Gallimard), it’s another way of writing this autobiographical narrative of Formation, it’s a text-language that seems incomprehensible at first, but becomes clearer when it’s read aloud. A text that has to be performed to make any sense.

The dance is a sort of contact dance that is brutal and uncensored, during which the text is shouted.

A whole part of Guyotat’s work is politically engaged against the Algerian war, in which he served himself as a soldier, and wrote and was imprisoned because of his writings. He was promoting Algerian independence. He found himself in situations of political resistance that he wrote about. I also wanted to adopt something of this kind of writing, as a manifesto.

In terms of the dance, of what the body can do, there needed to be a refrain that could in a sense punctuate the cycles of life, the four dancers start at the back of the platform and move forward in the same contact dance, in which the protagonist shifts each time, for example Nuno Bizarro (the man) is both carried by the others and thwarted. Together, they clash, fall, struggle to move forward, the others can help, but can also be obstacles, like a metaphor for building a life. A recurring quartet that functions through vignettes, first the old woman with the child, then they leave and are replaced by the older man with the child, the image of a father who guides, etc…

What are your hopes for this work?

Of course, that it can be seen as much as possible. That it will enable me to meet people and that the offshoots (workshops based on the piece) that we can create together will teach me new things, having been a teacher and having directed the National choreography centre in Angers, the teacher herself is taught, it is a permanent back and forth. This synergy allows us to reinvent ourselves. Dance is a position that allows you to interact with other knowledge. How to train oneself in order to transform oneself is at the heart of this question.

Since September 2016, you have been a teacher in the field of choreography, dance and performance at l’Ecole nationale des beaux-arts in Paris, what are your aims?

For many years I have drawn from the work of artists, I ran a school and worked on the educational thought of a place. Having also been a dancer and choreographer also had to do with my selection. Currently, I guide students in their research, and help them to develop their future practice. It’s very rejuvenating.

Biography
After her studies in philosophy and dance, in 1994 Emmanuelle Huynh received a Villa Médicis hors-les-murs grant for a project in Vietnam. Upon her return, she created the solo Múa, which marked the start of placing collaboration with artists from various fields at the core of her work. Emmanuelle Huynh develops a choreographic vocabulary that is constantly reinvented with each project:
Distribution en cours places an astrophysicist and his research on black holes in the midst of the dance (2000) ; Bord, tentative pour corps, textes and tables, presents texts by Christophe Tarkos on and under the tables of Nicolas Floc’h (2001) ; A Vida Enorme/épisode 1 (2003) screens an imaginary film, the soundtrack and images of which (the dance) are played in sequence.

The music by Xenakis generates the architecture of the choreographic work Cribles, légende chorégraphique pour 1000 danseurs, which premiered at Montpellier Danse in 2009. In the same year, she realised a part of her residency project at Villa Kujoyama (Kyoto 2001) by composing Shinbai, le vol de l’âme with a female master of ikebana (Japanese flower arrangement) in a staging by Lauro. She created Augures, a piece for seven performers, in 2012 at the Rencontres chorégraphiques internationales in Seine-Saint-Denis and Spiel, a duo with Akira Kasai, a butô artist at the Festival d’Automne in Paris in 2012.

Emmanuelle Huynh was director of the Centre national de danse contemporaine (CNDC) in Angers from February 2004 to December 2012, and reshaped the school, particularly through the creation of a new program, ‘Essais’, which awards the degree of ‘Master of dance, creation, performance’. She launched Schools, international meetings with schools of contemporary dance and art (2009, 2011, 2013), which allows schools to perform their teachings.

She reactivated the company MUA in 2013 and continued her creative work, and various educational activities and international, interdisciplinary cooperative projects.

In October 2014, she created TÔZAI !…, a work for six dancers and a monumental curtain at the Théâtre Garonne in Toulouse.

At the same time, in the years 2014-2015, on the invitation of the cultural services of the Embassy of France in New York, in collaboration with Jocelyn Cottencin, Emmanuelle Huynh developed the project A taxi driver, an architect and the High Line, a portrait of the city of New York through its architecture, spaces, and people, made up of filmed portraits and performance.

She was appointed as a professor in the field of choreography, dance and performance at the l’Ecole nationale des beaux-arts de Paris starting from the school year 2016-2017. ‘Formation’ is the 2017 work based on the eponymous text by Pierre Guyotat.

Formation a play by EMMANUELLE HUYNH