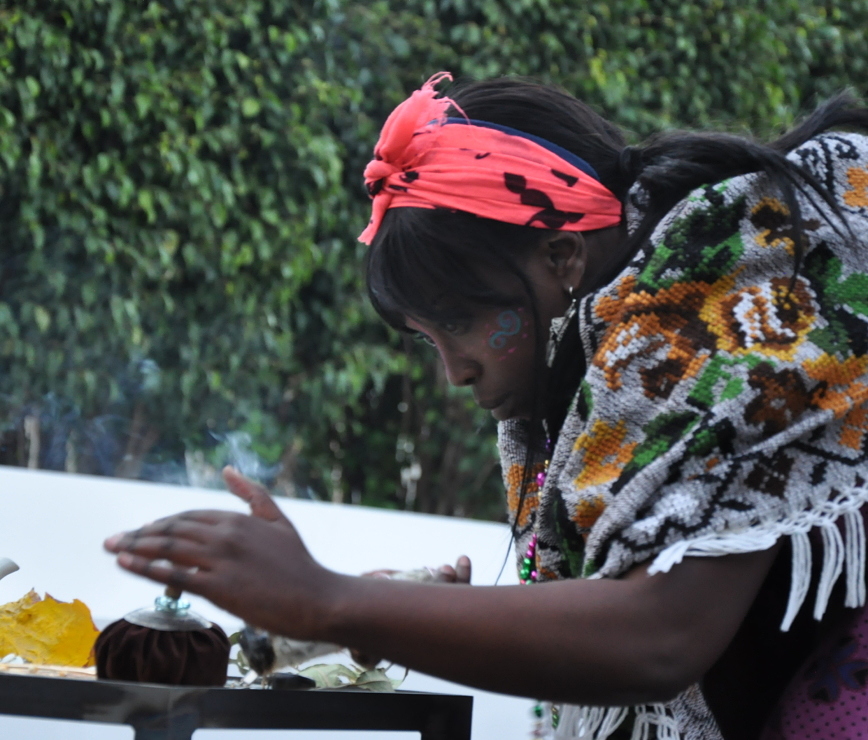 Grace Ndiritu proposes to invite two groups of people to participate in a living, political and social artwork. Her work entitled A Meal For My Ancestors: Healing the Museum will be a moment of sharing taking the form of a meal, lived as an artistic performance.

Grace Ndiritu’s art practice falls within an approach of living and performative art, inspired especially by alternative communities, lifestyle of the 60s and 70s, shamanism and mindfulness. For her residency at the Fondation Thalie, she will invite staff members of the UN, NATO and the EU Parliament; as well as refugees and asylum seekers who have experienced traumas in their country of origin and who have migrated to Brussels. Using shamanic practice, one of the oldest forms of spirituality of humanity and meditation techniques, the artist will lead them through an initiatory journey. She will organize several meditation classes with refugees before a ‘cooking together’ session  for the final meal, in which a public round-table will be organized with medical doctors, academics and shamans. A film and a publication will document the project.

Grace Ndiritu studied Textile Art at Winchester School of Art (UK) and at De Ateliers (Amsterdam) between 1998 and 2000. Some of her artworks are housed in museum collections such as the Metropolitan Museum of Art in New York and Modern Art Museum, Warsaw. Resuscitating the spirit of the surrealist sessions of the 1930s and the awareness groups of the 70s, Grace Ndiritu invites the audience to take part in meditations and collective performances under series entitled Healing The Museum. Socially engaged, the artist uses different expressions of esoteric practices to develop critical and introspective politically engaged tools to find a better ways to live together.
www.gracendiritu.com / www.thearkcenterexperiment.com

Your work is about touching our individual spirituality, in what sense this specific practice is linked to art?

In 2012 I began creating a new body of live performance works under the title Healing The Museum. It came out of a deep need to re-introduce non-rational methodologies such as shamanism to re-activate the ‘sacredness’ of art spaces. I believe that most modern art institutions are out of sync with their audiences’ everyday experiences and the widespread socio-economical and political changes that have taken place globally in the recent decades. Museums are dying. And I see shamanism as a way to re-activate the dying art space as a space for sharing, participation and ethics. From prehistoric to modern times the shaman was not only the group healer and facilitator of peace but also the creative; the artist. My recent performances continue this investigation into shamanic performance within the Museum context. The main principle of the Healing the Museum series being; to enliven the Museum once again back into action, so that the Museum can re-take its proper place; as a cultural space in which new advancements in art, audience participation and art education can affect wider society and life for the good of all beings.

Why did you choose to apply for a residency at Fondation Thalie?

I applied for a residency at Fondation Thalie as I had been trying to find a brave art institution that take would help produce this ambitious yet controversial project. I proposed to Fondation Thalie the idea of using performance as a Peace Building tool and work with the refugees from countries that are all at differing stages of rebuilding their societies post-conflict or in the process of attaining a permanent peace solution. My only stipulation for my project, was that it should also take place with the collaboration of staff members from U.N. NATO and EU Parliament offices based in Brussels. Participants from these organizations (top level staff, office staff, interns, security guards) would also be asked to take part.

I have asked for this because I think is is important to have both parties represented in the project. – i.e. the decision makers and the people who are affected by their decisions. But instead of judging or condemning actions taken by either side work in the lineage of Truth and Reconciliation I will focus on topics that the participants have in common e.g. their shared humanity, by bridge building between groups in order to better understand each other.

This is needed more than ever in the current crisis to mitigate further polarization. Moreover,  in preparation for the performance we will do together on 20th and 21st January 2018,  I will give free Mindfulness meditation classes to refugees and workshops on mind training entitled Feeding Your Demons to staff members U.N. NATO and EU Parliament and those that work directly with refugees.

To eliminate the idea of top down power dynamics I will level the playing field  even further, between the participants by leading them all together through a collective shamanic journey back to meet their ancestor homelands and ask for healing for themselves and their specific homeland. Moreover, we will have a group cooking together session for the participants and the general public will be asked to bring a meal from their ancestral homelands (whatever that means to the individual) and tell stories connected to their ancestors. By doing this I hope we will see the holistic, bigger picture that we as humans are all connected.

Briefly, what is your personal background?

I studied Textile Art at Winchester School of Art, UK and then went on do my post-graduate studies in fine art at the prestigious De Ateliers, Amsterdam 1998-2000. that was an amazing and rewarding time namely because of the excellent level of guest tutors which included Marlene Dumas (painter), Steve McQueen (film director), Tacita Dean (artist) and Stan Douglas (artist).  After five years in Holland working as an artist and diving into my esoteric studies,  I  moved to London to do a UK studio residency at Delfina Studio Trust in 2004.

I then took the radical decision in 2012 only to spend time in the city when necessary, and to otherwise live in rural, alternative and often spiritual communities, while expanding my research into nomadic lifestyles and training in esoteric studies such as shamanism, which she began over 16 years ago. My research so far has taken her to both Thai and Tibetan Buddhist monasteries, permaculture communities in New Zealand, forest tree dwellers in Argentina, neo-tribal festivals such the ‘Burning Man’ in Nevada, a Hare Krishna ashram and the ‘Findhorn’ New Age community in Scotland. My research into community life has so far resulted in the founding of The Ark: Center For Interdisciplinary Experimentation in 2017 at Laboratoires d’Aubervilliers in Paris.

How come you decide to focus on shamanic trance as a tool of your artistic practice ?

Beginning with an early studio performances for the video art works entitled Desert Storm (2004) and The Nightingale (2003) now in the collection of the Metropolitan Museum in New York, my work has evolved to include shamanic performances, photography, painting and textiles – the last being what my BA studies were originally in. My deep-rooted interest in shamanism, mysticism and Eastern meditative processes, symbolism, ecology, cultural specificities or historical injustices visually and energetically pervade my practice. My journeys are still and physical. My work critically highlights different economic systems, ecologies, political or natural disasters, women labour, pre-historical data, ancient and present narratives, the story of Africa and powerfully activates different levels of reality. My work offers new perspectives on history, media and current affairs via the immediacy of video art, painting and critical writing. I actively seek to return power to those who are dispossessed. Simple, atemporal, performative and poetic, my work merges, contrasts and transcends socio-political questions. Interests in performance, nomadism, shamanism, diverse meditative practices, oriental chants, music, the history of civilizations, and extreme tourism all find manifestations in my work. For the Fondation Thalie project specifically, I will bring fifteen years of  practicing meditation, shamanism, family constellation therapy work and many more holistic health practices, alongside exhibiting as an artist internationally.

What are your expectations from your final performance?

I have no specific expectations. My only wish is to create a space for sharing new ideas and new ways of thinking with two groups of people who never meet socially but only in times of crisis. This performative respite that A Meal For Ancestors allows might give us the mental space to find new solutions to the difficult problems we now face. i.e. currently the mass migration of the human population due to war, climate change and poverty. I believe through accessing right brain thinking non- rational methodologies such as shamanism and meditation could allow us to this. This is also why during the performance weekend, we will have presentations by medical doctors and other academics on Commensality – benefits of eating together and shamanic trance effects on Neuro-biology of human body.

Hopefully all parties (refugees, staff members and general public) leave with a set of powerful tools and new information to relieve the pressure of working  and living with and within these powerful institutions and which they can take back to their job and their lives.